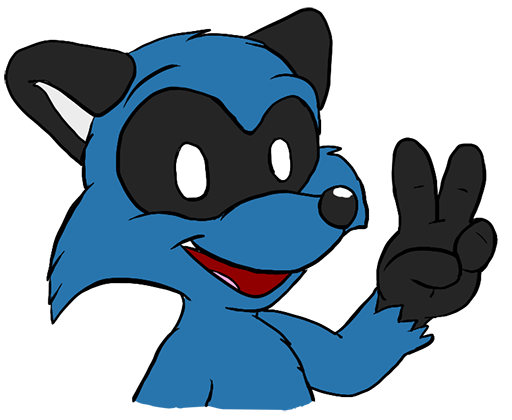 I was asked, after making my last post, to share a few more of my pictures and experiences from this past Inktober. As I said earlier, many of these were discoveries and thoughts about the creative process in general and my personal history more than just writing, but I hope you’ll still find it interesting and encouraging of your own personal explorations.

The picture I think I’ll share in this post is one that’s probably not too surprising to some folks that know me well: Bright Heart Raccoon. 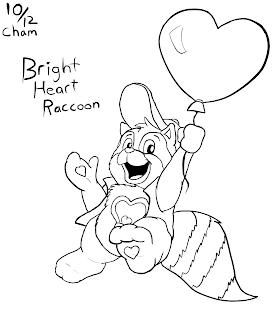 The Care Bears have been kind of a quiet franchise since the mid 90s, but they’re starting to gain some public attention again. What you may see of them now, though, pales in comparison to the phenomenon they were back in the 80s and even the early 90s. They had cartoons, toys, dolls, movies, lunch boxes… You name it, and there was a good chance there was a Care Bears version of it back then. Really, this was the case for a lot of the explosive 80s-90s cartoons. G.I. Joe, Transformers, My Little Pony, Rainbow Bright, Ghostbusters (yeah, yeah, they were a movie first), and more were all part of a huge marketing machine designed to get kids to spend as much of their parents’ money as possible, and it worked. Franchises lived or died by their toy sales, so there was a real push from companies to fight for our attention.

However, cynical marketing psychology aside, I adored the Care Bears as a kid. I went to a small school, and one of my first experiences with cliques in Kindergarten was having to choose a side between Care Bears and Rainbow Bright. There was a My Little Pony and Strawberry Shortcake crowd too, but they were the fringe groups. Kinda like that weird kid who always threw out “Atari!” during the SEGA/Nintendo console wars. Anyways, I was all about Care Bears and constantly wanted new toys from the show, but my family was firmly in the lower-middle class, so the best I got was a couple of plushies and a sticker book.

What really made a difference in cementing my fandom, since my folks couldn’t afford to get me tons of junk, was the availability of Care Bear stuff at my local library. I most heavily consumed the Nelvana series VHS tapes, but they also carried a few books that I enjoyed. I have a distinct memory of our family flying to Florida to visit Disney World (One of, I think, two trips we ever took there), and I was terrified. The only thing that could calm me down was reading this big Care Bears picture book of the first movie. I read that thing cover to cover repeatedly and drank up the illustrations.

The VHS cartoons, though, held a special kind of magic. They were so inventive to me and the characters often did ‘variety show’-style stuff where the same cast would be in different skits. In one show, Champ Bear was a knight, while in another episode, he was a basketball player or they were going camping. My favorite character, though, quickly became Bright Heart Raccoon. Not only was he my favorite color, but he was super smart and also the only raccoon in the cast, kind of like how I was the only mixed race kid in my class. It made him feel really special to me, and I latched on hard. So I asked my parents for stuff with Bright Heart Raccoon on it… but there really wasn’t any. He wasn’t a mainline Care Bear, so he was never in group shots and barely had his own toys or dolls. Additionally, my dad wasn’t too fond of my Care Bear fever since it was distinctly ‘girly stuff’ and, again, at that time, we didn’t have a ton of money to waste searching for special toys.

That was when my mother started doing something especially awesome… She showed me that she could draw. Since I couldn’t really get posters of Care Bears or anything, she would sit down and look at a picture of Bright Heart (and I think Grumpy Bear too, since he was one of her favorites), and she’d draw up a picture of them standing side by side in colored pencil. It wasn’t a big picture, probably a little bigger than a postcard, but it was drawn especially for me, and it was one of a kind. As the years went on, she drew pictures for me of various characters and things that I liked, eventually encouraging me to start drawing for myself after years of watching her, but Bright Heart was the first one, and that was extremely special to me.

The outfit he has in this drawing is the same one he had in the cartoon series, though with some modifications since I always thought the sneakers were silly and I like the heart-shaped pawprints that Care Bears have. If you look at some of my other art, you can see how this design inspired some of my characters and drawing habits, but I’ve definitely come a long way from it. In truth, I don’t think I’ve attempted to draw Bright Heart’s design directly since I was about ten years old, making this one heck of a blast from the past.

As I was drawing this and inking this, I was remembering learning how to draw raccoon masks and tails for the first time, figuring out how to fit a ballcap between a pair of animal ears, and those warm summer days spent watching Mom draw and looking at her art on my bedroom wall. It inspired a lot, and I was sure to send this to my mother after I finished it to tell her as much.

So, yeah, thanks Mom ;) You set me on an awesome creative path.

That’ll do it for this post, but I’ll make at least one more in the future about another of my Inktober memory lane experiences. I hope you all enjoy it, and let me know if there’s a drawing you particularly want to know the backstory on!

Take care, all, and happy reading!

Posted by chameleonice at 10:26 AM

chameleonice
Just a friendly raccoon working at the local library and writing his magnum opus (or whatever silly thing enters his head). Contrary to popular belief, I do not live in a trash can anymore!