We’ve talked previously of the problems facing perceptions of anthropomorphic characters. Our main focus was how some consider them too cute to be taken seriously or cannot get past the initial association of anthropomorphic animals with children and children’s media.

However, there is one other perception of anthropomorphic animals that actually escaped my mind until it was recently brought up:

Some folks just have no idea what anthro animals should look like.

I’m not talking about writers being unable to consistently describe animal characters of various levels of anthropomorphism, though that certainly causes its own problems. The main issue, once again, lies in perception. I think it’s difficult to really make a blanket statement of what this exactly is, but I will try with an example.

When I talk to a friend about an awesome story centering on a suave, sophisticated cat that drives about town and stumbles into a world of villainy and violence, he pictures this:
Meanwhile, while I’m talking about this, I have THIS picture in my mind’s eye:
Not quite the same thing, is it? It certainly gives a very different ‘feel’ to the story depending upon which of these you’re picturing and which one speaks more to the kinds of characters that you enjoy.

It wasn’t until somebody, after reading a story of mine, said to me that they were picturing normal dogs in human clothing that I realized this mental separation existed. Not everybody grew up with Disney or Don Bluth films to color their perception of talking animals, and I think some of us fans of anthropomorphic literature forget that. I remember reading a friend’s work in which he actually wanted the reader to picture more realistic animals wielding guns and swords rather than cartoony creatures that we would see cavorting with the likes of Mickey Mouse. He felt one type of visual lent itself better to dark and serious story-telling than the other.

That is why I think that anthropomorphic literature, perhaps more than most, benefits a great deal from having art of some kind. Not only is good anthro art a pleasure to look at for fans of the genre, but it also helps readers to picture characters that they may have no other mental frame of reference for. It gives readers a place to start and helps make the story less about understanding WHAT you’re reading about and more about understanding WHO you’re reading about. It’s sort of like those readers that like to see a movie version of a book before reading so that they can picture the actors and scenery better during the story.

It hurts to admit it, but sometimes it doesn’t matter how wonderful your descriptions are. If a person can’t picture some fantastical creature that you’re describing and billing as your protagonist, they’re going to struggle.

Also, when I say that anthropomorphic literature really benefits from art, I don’t necessarily mean that they need to have illustrations throughout the book. Sometimes a simple, well-done picture on the cover can do all that it needs to help readers to picture the creatures on the pages. One of the current books I’m reading is very much like that. It describes animals in a unique and strange way, giving normal-ish animals very different colorations and adornments. Thanks to the cover image, though, I’ve already got a picture in my mind of these animals, their ‘clothing’, and the type of characters I’ll be reading about! 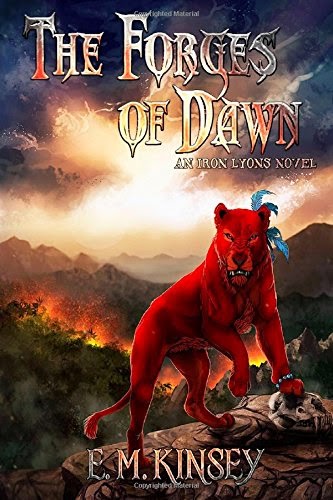 Of course, even with that, it doesn't stop me from picturing things other than how the author exactly describes them…

Until next time, happy reading, all!
-Chammy


The Forges of Dawn by E.M. Kinsey
Posted by chameleonice at 5:52 PM

chameleonice
Just a friendly raccoon working at the local library and writing his magnum opus (or whatever silly thing enters his head). Contrary to popular belief, I do not live in a trash can anymore!